How Low Could the New Drachma Go? 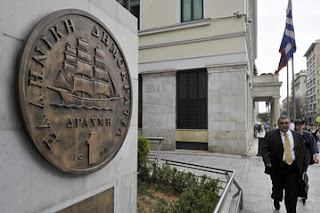 Fun fact for the day: Up until March next year, you can still exchange your drachma notes for euros at the Bank of Greece.

If you think for a moment about what might happen to the value of the drachma if it was reintroduced* (which, of course, would never, ever happen, right?) then it might be better to do that sooner rather than later.

(*Note to pedants: yes, we know it would be a new currency–the new drachma–but cut us some slack.)

The boffins at Roubini Global Economics reckon the new drachma could fall by as much as 120%.

OK, so, nothing can really fall by more than 100%, unless Greeks agreed to pay people to take the currency off their hands.