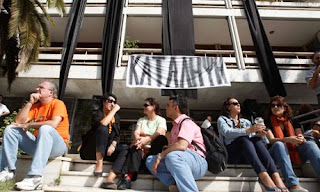 International experts with the task of compiling a crucial review of Greece's fiscal progress ran into trouble before they could even start the job as public-sector workers protesting against wage cuts, layoffs and higher taxes locked them out of office buildings.

Inspectors from the European Union, International Monetary Fund and European Central Bank were greeted on Thursday with banners deploring the "barbaric measures" the so-called "troika" has meted out in exchange for propping up the moribund Greek economy. At the finance ministry – the hub of talks between the debt-stricken country and creditors – protesters shouted "take your bailout and leave" and prevented auditors from entering the building.

"We are sending a loud message to the government and the European Union that we have reached our limits, that it is the workers in our country and especially workers in the public domain who have carried the burden [of cost-cutting policies]," said Costas Tsikrikas, president of Adedy, the union of civil servants.