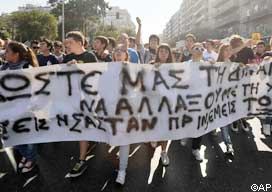 Public sector workers staged symbolic takeovers of government ministries and state organisations in Athens on Thursday as heads of mission from the troika – the European Union, International Monetary Fund and European Central Bank – resume discussions on the government’s latest attempt to put fiscal and structural reforms back on track.

“We’ll be occupying the building continuously for the next 48 hours”, said a union official at the finance ministry where Evangelos Venizelos, the minister, was due to hold a first meeting with troika officials.

Groups of activists also held unannounced sit-ins at the development, justice, health and environment ministries and at the national accounts office, according to Adedy, the civil servants’ union.

“These are timed to coincide with the return to Greece of the troika and the barbarous new measures that have been decided to cut our salaries further” said an Adedy statement.