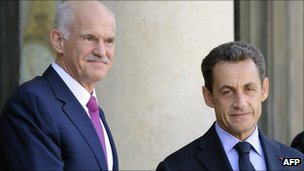 The Greek prime minister has been having a day of talks with fellow EU leaders on a new bailout tranche Greece needs to avoid bankruptcy in October.

International inspectors are in Athens to decide whether Greece should receive the 8bn euros (£6.9bn; $10.9bn).

Protesters forced the rescheduling of a meeting on Friday morning.

Anger continues over austerity measures including a new property tax, and demonstrators have publicly burnt copies of emergency tax notices outside a tax office in the country's second city, Thessaloniki.

Meanwhile, the expansion of a general bailout fund for the eurozone looks on track for approval.

Jean-Claude Juncker, head of the eurozone group of finance ministers (Eurogroup), predicted all of the euro states would have endorsed the expansion by mid-October.