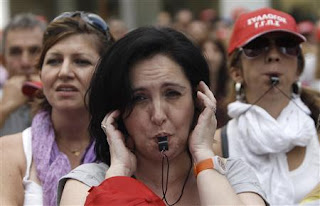 Greece's ruling party forced through a deeply unpopular property tax on Tuesday to lure international lending inspectors back to Athens to release vital aid, and riot police fired tear gas to disperse about 1,000 protesters outside parliament.

The vote was an important test of the Socialist government's ability to push through further belt tightening to win an 8-billion-euro ($11 billion) loan from the EU and IMF that it needs to avoid running out of cash next month.

Angry anti-austerity protesters whistled and jeered on the steps of parliament, where all of Prime Minister George Papandreou's 154 Socialist deputies pushed the measure through in the 300-seat assembly.

"The decisions of July 21 are like an institutional Bible to us," Finance Minister Evangelos Venizelos said earlier, vowing to meet the targets of a new bailout deal agreed this summer. "They are the framework within which we move."

The inspectors are expected back in Athens by Thursday and it will be up to them to approve the fresh funds.