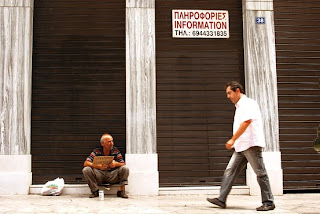 Greeks like Maria Tergi speak of how cuts are eroding livelihoods and social structures. She felt compelled to shut down her lottery shop on Athens's busy Omonia square after 50 years because tight funding closed a drug rehabilitation center nearby, sending drug addicts out on the street outside her door.

"My customers play 70% less money because of the crisis, the landlord kept on asking higher rent and now this," she says when closing down her shop for the last time. "It has never been this bad. I can't cover the running costs so I am closing down."

Across town, Efi Panagou owns three small apartments and two shops. The income from the rents gave her a decent living but her tenants have stopped paying since February, even as the government raises her property taxes.

"The tenants come to me crying, saying that if they pay rent they won't be able to pay for utilities and food—it breaks my heart," she says. "The government has no sense of reality. They only know to talk numbers." 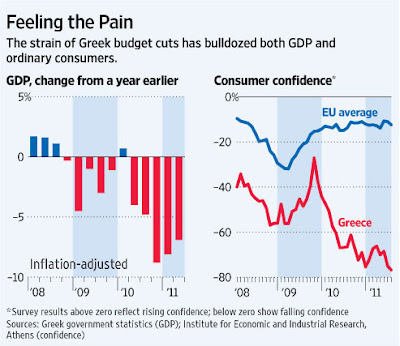 Posted by Yulie Foka-Kavalieraki at 10:30 AM