Greece's worsening slump is threatening to compound another risk for the country: the steady withdrawal of money from Greek banks.

In the last 20 months, the country's banks have suffered an unprecedented withdrawal of customer deposits. Tens of thousands of Greeks—from the well-heeled to the less well-off—have moved their savings out of the country or stashed the cash in safe-deposit boxes or under a mattress, bankers say.

The consequence for many Greek banks is a growing shortage of liquidity that is increasing their reliance on emergency funding from the European Central Bank and forcing them to further cut lending to businesses. That, in turn, is deepening Greece's recession, making it harder for the government to narrow its gaping budget deficit.

Speculation that the government might default on its debt, pushing the banking system into insolvency, is fueling such withdrawals. In addition, many Greek households, under financial pressure, simply need their cash reserves to make ends meet.

Economists say there are signs that bank deposits have stabilized in recent weeks, following the latest European bailout deal for Greece reached in July. But amid a worsening economic outlook, analysts say they doubt the calm will last. 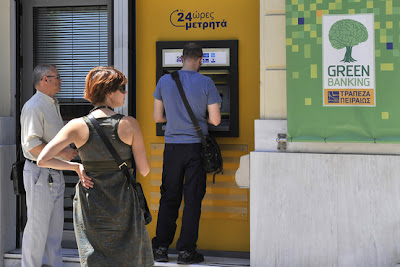 Posted by Yulie Foka-Kavalieraki at 10:27 AM