Greek bailout in doubt because of European countries’ demands for collateral 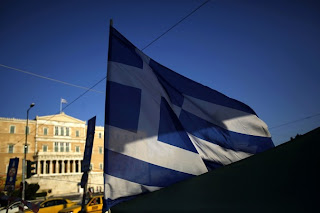 A program crafted only a month ago aimed at keeping Greece from defaulting on its bond payments is threatening to unravel because of a demand that the government post hundreds of millions of dollars in collateral for new emergency loans.

That demand has come from Finland, one of the European countries whose leaders proposed a rescue program for Greece, and has set off a series of similar requests from other euro-zone capitals that could jeopardize efforts to calm world markets.

The collateral issue is one of several stumbling blocks facing the program, announced by European leaders at a July 21 summit. Their agreement was designed to halt a nearly two-year-old crisis over government debt and financial stability in the 17-nation euro currency zone.

Since then the new Greek rescue program, which would be worth about $150 billion to the Athens government, has been under political attack in northern European countries where “bailout fatigue” is fast setting in. Efforts to include private investors in the rescue are struggling as well. While major banks agreed to accept a reduced value for their holdings of Greek bonds, the Greek finance ministry this week said it would scrap the program altogether if more private investors did not sign on.