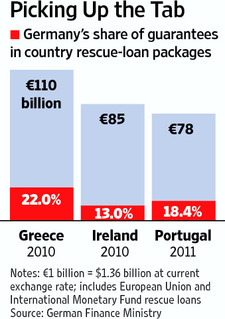 As Angela Merkel races to convince Germans that their continued prosperity rests on preserving the euro, she is encountering strong resistance even from those in her own party who have been traditionally among the country's most pro-European politicians.

When German lawmakers vote Thursday on whether to put more money into Europe's bailout fund—a step many investors see as essential to prevent a market panic—several conservative deputies, including Wolfgang Bosbach, a prominent champion of European integration, are expected to vote "no." Mr. Bosbach, a high-ranking conservative in Ms. Merkel's Christian Democratic Union, has recently become an outspoken critic of the bailout strategy.

"The first medicine didn't work, and now we are simply doubling the dose," said the lanky Mr. Bosbach of the Greek debt crisis. "My fear is that when the big bang happens, it won't just be us who will have to pay but generations hereafter."

The lawmaker rebellion underscores a broader shift among Germans about their nation's role in Europe since the crisis erupted nearly two years ago. While the Thursday vote is expected to pass, and a vast majority of Germans continue to feel a strong, historical commitment to Europe, with a common currency as its anchor, many have grown doubtful of whether it's worth the ever-growing cost of saving the euro. 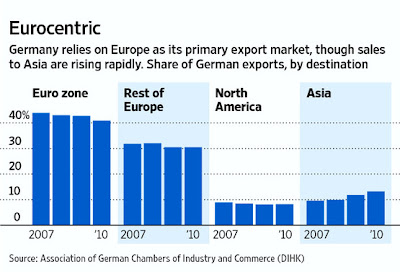 Posted by Yulie Foka-Kavalieraki at 8:45 AM