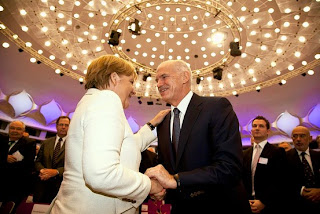 German Chancellor Angela Merkel's ruling center-right coalition worked to muster enough votes to pass legislation on Thursday to expand the euro zone's bailout fund. After a tense round of meetings with lawmakers, however, it remained unclear if the coalition could do it without the opposition's help.

The 17 euro-zone governments agreed in July to expand the European Financial Stability Facility to €440 billion ($593 billion) from €250 billion, a move that German and other euro-zone lawmakers are in the process of ratifying.

Even as they do this, they are facing calls—from U.S. Treasury Secretary Timothy Geithner, among others—to further boost the fund's firepower. This week the German government firmly rejected such an idea, warning it would jeopardize the triple-A credit ratings of some contributing countries.

More
Posted by Yulie Foka-Kavalieraki at 7:50 AM