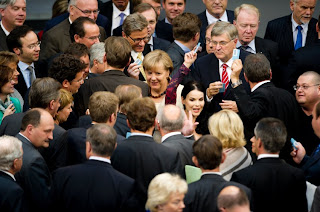 Chancellor Angela Merkel got the majority she needed on Thursday as German parliament passed the expansion of the euro backstop fund, the EFSF. With fewer conservative renegades than feared, Merkel can breathe a sigh of relief. But with more difficult decisions approaching, the respite may not last.

German parliamentarians on Thursday approved the planned expansion of the European Financial Stability Facility (EFSF) with 523 voting in favor, 85 against and three abstentions.

The bill's passage is a vital step in euro-zone efforts to increase the fund's lending capacity from its current €250 billion ($338 billion) to €440 billion. Germany's share of guarantees for the fund will rise from €120 billion to €211 billion, though several other euro-zone parliaments must still vote on the expansion.

The result also means that Merkel can breathe a sigh of relief. There had been concern that renegades within her center-right coalition could mean that Merkel would be forced to rely on opposition votes to pass the legislation. Had that come to pass, her power would have been severely curtailed .

In the end, however, 315 parliamentarians from Merkel's conservatives and from her junior coalition partners, the Free Democrats, voted in favor of the EFSF expansion. Fewer than 311 would have limited Merkel's power by making her reliant on opposition votes and indicating that she could no longer rely on the support of her own coalition.