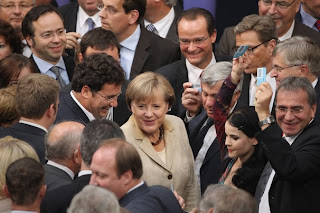 German chancellor Angela Merkel’s political standing was reinforced on Thursday, as she succeeded in convincing a majority of her own partners to approve expanded powers for the European bailout fund that she has said is critical to ensuring economic stability on the continent.

The expanded powers were approved in Germany based on the support of opposition parties, and it will go forward if six other euro area countries approve it over the coming weeks. But the vote in Germany suggests that Merkel has little ground on which to stand in pushing for further measures that would increase Germany’s commitments to helping its troubled fellow euro-users.

Merkel said this week that a July agreement with Greece on a second bailout may have to be renegotiated based on the findings of an inspection team from the International Monetary Fund and other creditors that arrived in Athens on Thursday. Her flexibility may be limited by the parliamentary vote.

“We are in an exceptionally difficult situation, because the financial markets remain extremely uncertain,” said German Finance Minister Wolfgang Schaeuble in parliament ahead of the vote, in a bid to win support for the measures.

See also the FT, the NYT and the WSJ
Posted by Yulie Foka-Kavalieraki at 1:38 PM