From Berlin to Athens 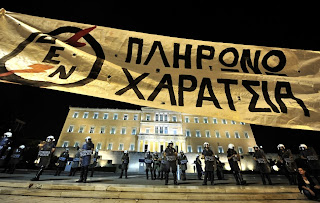 The debt crisis in Greece is a landmark moment in European politics and the history of the European Union. The signers of the Maastricht treaty never expected that their grand project in supranational integration would face the type of stresses currently seen on political stages in numerous capitals across the continent, not to mention in the markets. In Athens, citizens are protesting against harsh austerity measures and new taxes that have slashed real income significantly, and a government some feel is catering to Europe rather than Greece. In Berlin, Chancellor Angela Merkel faces an electorate that is irate at the idea of bailing out “profligate” peripheral countries, especially after German citizens bore the brunt of austerity measures earlier in the 2000s.

With negotiators and uneasy publics edging reluctantly toward a European fiscal state, the half-measures on offer may be too late to stem the collateral damage of austerity within the Eurozone that is now spreading well beyond the borders of the continent. The crisis could tip the fragile U.S. economy back into a double-dip recession, and each day anger and frustration increases against European leaders who seem powerless against the massive crisis on their hands.

Above, protestors demonstrate against the latest austerity measures, a property tax set to raise rates on electricity, in front of the Greek parliament in Athens on Sept. 25. Their banner reads: "I won't pay the head tax," a reference to a levy that was implemented during the Ottoman occupation of Greece.