Fighting for its life: The euro zone is in intensive care 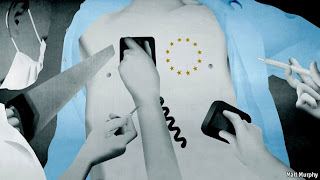 What’s the French for “this sucker could go down”? Echoes of 2008, when the global financial system wobbled and George Bush gave his pithy view of the American economy, now resound on the other side of the Atlantic. Credit-default-swap spreads for European banks, a measure of how costly it is to buy insurance against their default, are at record highs (see the chart).

The rates that banks charge each other for loans in the interbank market are rising, too, as they did then. Rumours swirl and panic flares: shares in BNP Paribas, a well-run French bank, dropped by 12% on the morning of September 13th following reports that no one would lend it dollars. BNP’s denials saw the shares bounce back later in the day. Shares in Société Générale, another French bank, whipsawed too. The French banks’ reliance on short-term dollar funding, which American money-market funds are increasingly leery of providing, is one reason why Moody’s, a ratings agency, downgraded Société Générale on September 14th, though exposure to sovereign default is also a key factor.

Posted by Yulie Foka-Kavalieraki at 10:00 AM