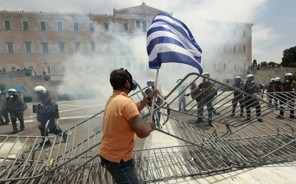 Stark political differences are at the heart of the Euromess. The German parliament, for example, is reluctant to threaten Germany’s own economy by bailing out Greece, Italy, and other troubled states. To explain the political side of things, I talked to Henry Farrell, associate professor of political science and international affairs at George Washington University. He’s not optimistic. (The transcript has been lightly edited for length and clarity.)

Suzy Khimm: How likely is it that we’re headed for another global financial collapse due to Eurozone crisis?

The fundamental problem here is a profoundly political problem. It used to be that bondholders assumed that the EU had changed things so that bigger member states were on the hook for the debts of the poorer member states. Therefore, it made sense to lend money to poorer member states, and bondholders were going to get their payday. I would call it a confidence bubble. It coasts along for a period of time, but once that confidence bubble gets pricked, it’s really hard to get it back. Bondholders were basing their holdings on set of political expectations — that when push came to shove, Germany would either bail out Greece, or Greece would never have to be bailed because it would behave the way that good northern states would.

In the EU, the instinct is always to fudge — to come up with technocratic fudges that are incomprehensible to the outside world but get some minimum consensus among states…But the problem is not a technocratic problem. It’s a political problem. So they’re going to hesitatingly help out the Greeks, but it’s not going to provide political actors or market actors the confidence I think they need.