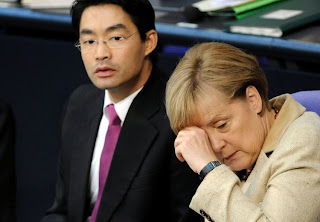 On Thursday, Chancellor Angela Merkel showed once again that she could deliver the goods when she achieved a convincing parliamentary majority in a crucial vote on expanding the euro rescue fund. German commentators say the vote is a step in the right direction but warn that further obstacles lie ahead.

It was one of the most anticipated parliamentary votes of the year. If it had gone wrong, it could have cost Angela Merkel her chancellorship.

In the end, Merkel managed to pull it off -- as she has so often in the past. The Bundestag passed the expansion of the euro backstop fund, the EFSF, with 523 votes in favor, 85 against and three abstentions.

The result meant that Merkel could breathe a sigh of relief. There had been concern that renegades within her center-right coalition could force the chancellor to rely on opposition votes to pass the legislation. Had that happened, her power would have been severely curtailed.

In the end, however, 315 parliamentarians from Merkel's conservatives and from her junior coalition partners, the Free Democrats, voted in favor of the EFSF expansion. If the total had been below the so-called "chancellor's majority" of 311, it would have meant that Merkel was reliant on opposition votes, indicating she could no longer rely on the support of her own coalition.