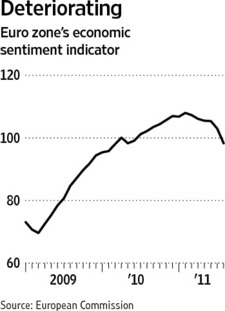 Sentiment among euro-zone companies and consumers plunged in August, the latest sign that steep declines in equity markets earlier in the month, public anger over the second bailout of Greece and signs of feeble growth in Germany are taking a severe toll on the economic outlook.

The European Central Bank stepped into the fray again as the euro bloc's primary crisis responder, buying Italian and Spanish bonds ahead of a key sale of longer-term Italian government debt.

The Economic Sentiment Index fell for a sixth straight month, to 98.3 in August from 103.0 in July, the European Commission said, the weakest reading since May 2010. Economists had expected a smaller decline to 100.5.

The drop "resulted from a broad-based deterioration in sentiment across the sectors, with losses in confidence being particularly marked in services, retail trade and among consumers," the European Commission said in a statement. 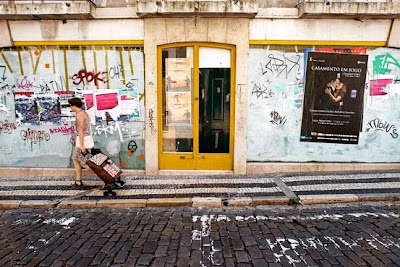 Posted by Yulie Foka-Kavalieraki at 9:19 PM