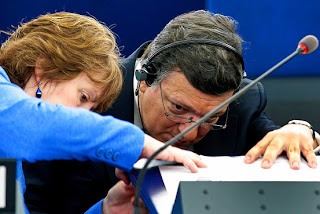 The euro zone is on track to expand its bailout fund for indebted countries, which looks set to win approval in Germany's parliament on Thursday following its ratification by Finnish lawmakers Wednesday.

But the debate among Europe's crisis managers has already moved on to two thornier issues: a more radical increase in the scope of bailouts, and possible debt restructuring for Greece.

Greece's failure to close its budget shortfall is prompting some European governments, led by Germany, to push for a re-examination of the international bailout program for Athens, according to officials involved in the discussions. In return, Germany is under pressure to agree to "leverage" the euro-zone bailout fund by using its resources in ways that multiply its impact, these officials say.

Discussions about both issues are expected to gather pace in October, once all euro-zone nations have ratified the previous set of changes to the bailout fund.