One of the benefits of being an academic economist is that market participants and government officials will often tell you what they think in relatively frank terms.

Here is what I learned in dozens of meetings last week in Frankfurt, Madrid and London:

-- There is wide agreement that the status quo is unsustainable, and no one is optimistic about the future. The elevated cost of borrowing for banks and some governments must be addressed within weeks or at most a couple of months.

-- The euro area needs more integration and cooperation or it will dissolve. European central bankers say a breakup would cost a lot more than maintaining the union, yet they admit that there are severe -- and possibly insurmountable -- political impediments to getting Germany to guarantee other countries’ debt.

-- The prescription for what needs to be done has evolved in recent months. Many outside experts long believed that the largest European banks were seriously undercapitalized. The core of the problem was the high levels of sovereign debt that had not been marked to market that are held by banks in many countries. For example, Spanish banks at the end of 2010 had 230 billion euros of government debt from troubled countries, though less than 7 percent of those assets were marked to market. 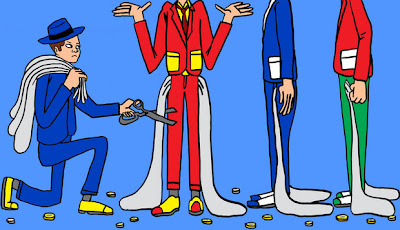 Posted by Yulie Foka-Kavalieraki at 8:50 AM