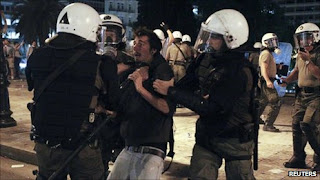 The head of the European Commission has told Euro MPs that Greece will stay in the eurozone, but warned that the EU was facing its "greatest challenge".

Appealing for patience over the Greek debt crisis in his annual State of the Union address, Manuel Barroso said: "This is not a sprint but a marathon."

There were new protests in Athens ahead of a visit by international lenders.

The so-called troika, made up of the European Commission, European Central Bank (ECB) and International Monetary Fund (IMF), are assessing Greece's eligibility for further bailout money.

A key obstacle to the payment was removed on Tuesday when the Greek parliament passed a controversial new property tax bill, first announced earlier this month, that aims to boost revenues.

Outside parliament, on Syntagma Square, riot police fired tear gas, and reportedly used truncheons, to break up a protest by about 1,000 demonstrators.

Greek tweeters complained that local media were playing down the use of force by police to disperse anti-austerity protesters from the "indignant" movement.

"Strategy of police and government is obviously not to let people gather and demonstrate peacefully in Syntagma," tweeted one leading blogger, @irategreek.