Debt inspectors prepare to fly back into ailing Greece 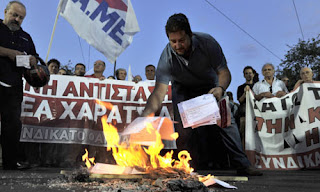 Officials from the EU and IMF, who cut short a visit to Greece in a row over missed budget targets, return to Athens on Thursday as the debt-stricken country races against the clock to secure the crucial aid needed to avert bankruptcy.

The monitors will examine whether a new package of biting austerity measures – which include deep cuts to public sector wages and pensions – will be enough to put Greece's crippled economy back on track after months of foot-dragging over reforms.

International creditors had hoped that the budget deficit, now believed to be over 9%, would be reduced to 7.4% by the year's end.

But the experts are flying into a capital brought to a standstill by striking transport workers, fraught with protests and rattled by rising anger about belt-tightening measures that are clearly pushing Greeks deeper into poverty.