Caught in the Labyrinth of Greece's Debt Restructuring 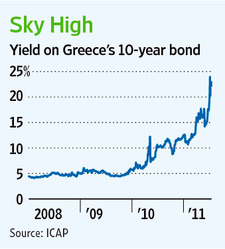 by Richard Barley and Simon Nixon

The euro zone now looks likely to get its expanded bailout fund, and Greece looks likely to get the next tranche of its first rescue package. But a new front in the euro crisis is opening up: what to do if Greece's second bailout package, worth €109 billion ($147.8 billion) and agreed to in July, isn't enough.

That risk is real. But with Greece reaching the limits of austerity, at least in the near-term, there are only two options for filling any shortfall. Either euro-zone governments and the International Monetary Fund must dig deeper into their pockets, or Greece has to unpick its deal with bondholders to secure more debt relief.

Some argue Greece should seize the opportunity to impose bigger losses on bondholders. Greece has about €360 billion of debt, equivalent to 165% of 2011 GDP. The July 21 deal aims to swap €135 billion to €150 billion for new bonds worth 79% of the face value of the old ones. But that will still leave Greece with a debt-to-GDP ratio of 150%, according to Barclays Capital estimates. That looks unsustainable.

To reduce debt to the euro-zone average of 80% of GDP, would mean writing down all Greek debt, excluding T-bills and IMF loans, by 57%, Citigroup says, or €184 billion.

Greek bonds already trade at 30 cents to 40 cents on the euro, suggesting deeper restructuring is in the price.