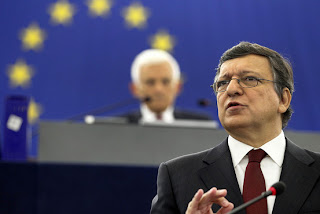 The president of the European Commission, José Manuel Barroso, urged the European Union to shed the plodding pace of reform that has left it struggling to contain the sovereign-debt crisis, warning in his annual state-of-the-union address that the bloc risks falling apart if it doesn't quickly come together.

For much of the past 18 months, the euro zone's crisis response has been slowed by internal disagreements, seemingly endless debates and an insistence that nearly every decision be approved by everyone. An agreement to increase the size of the euro zone's main bailout fund, for instance, was reached in principle in March. Six months later, it is still being voted on by national parliaments.

"The pace of our joint endeavor cannot be dictated by the slowest," Mr. Barroso said.

Speaking to the European Parliament here, Mr. Barroso made a case for aggressive action where the EU's 27 member states—and particularly the 17 members of the euro zone—so far have treaded cautiously.