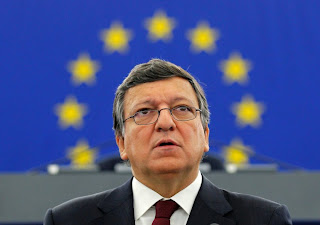 European Commission President Jose Manuel Barroso has said in an interview that the EU's institutions need to be strengthened to stabilize the euro zone, arguing that national governments can't be trusted to take determined action. Meanwhile, former German Finance Minister Peer Steinbrück says it's time to openly admit that Greece is practically bankrupt.

He might be "very happy" that the German parliament approved the expansion of the euro rescue fund on Thursday, but European Commission President Jose Manuel Barroso appears far from happy with how the European Union is currently functioning.

In a hard-hitting interview with Friday's edition of the German daily Süddeutsche Zeitung, Barroso warned that the EU was in its "deepest ever crisis" and said that the bloc needed a more closely coordinated economic policy in order to stabilize the euro zone and the entire EU.

He called for more power for the EU's institutions, arguing that it was an "illusion" to think that the euro zone's economic policy could be coordinated just by the European Council, the institution that comprises the leaders of the EU's 27 members, which meets twice a year.

He said that setting rules for a stable euro zone could not only be left to the member states. "That will never work," he said, explaining that national governments "always try to negotiate." Barroso said there was a good reason why there were independent institutions such as the European Commission -- the EU's executive body -- and the EU's Court of Justice.