Bailout for Greece Falters Over Demand for Collateral 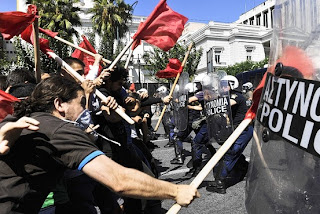 Euro-zone policy makers on Thursday appeared no nearer to settling a dispute over Finland's collateral demands in exchange for participating in a €110 billion ($158.6 billion) bailout for Greece, raising concerns that the Mediterranean nation may default.

Markets have grown more worried about the potential for a Greek debt default amid an apparent lack of progress in resolving the collateral issue this week. Finland, meanwhile, shows no sign of backing down.

The cancellation comes at a sensitive time for relations with Russia, and amid growing nervousness about dissent within the ranks of her own party over her handling of the euro-zone debt crisis.

"The date collides with the introduction of the [European Financial Stability Facility] treaty into the Bundestag," a German government official said Thursday, adding that the chancellor wants to stay in Berlin due to the significance of the issue.

More
Posted by Yulie Foka-Kavalieraki at 9:24 AM