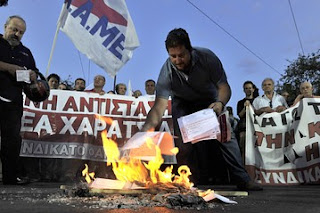 Temperatures are running high in Athens again as EU and IMF returned to resume negotiation over a new handout for Greece, on the condition that the government inflict more pain on the population.

Mobs of angry civil servants blocked entrances to government agencies in Athens, included a group of protesters at the finance ministry hoping to prevent the EU and IMF officials from entering the building.

Almost daily strikes have rolled on. On Tuesday it was the Greek taxi owners continuing their 48-hour strike, joined in similar protests by state doctors, archaeologists and state-media technicians.

Not hard to see why. After pay cuts over the past year, new taxes on property and lower incomes are slamming households. Fully 100,000 public-sector jobs will have to go by 2015, a third of them by the end of this year. Pensions above 1200 euros are being slashed by 20% and those for people below 55 will drop by as much as 40%. Funding to state-supported institutions is evaporating, as is state infrastructure spending.