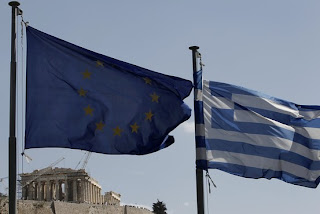 Analysts warned that Greece is at risk for a fourth year of recession in 2012, defying official forecasts of a recovery and dealing a further setback to the government's deficit-cutting plans.

Amid plunging consumer demand, weakening global growth prospects and the possibility of fresh austerity measures, analysts said Greece's economy could shrink 2% or more next year, following a 4.5% contraction in 2010 and an expected 3.9% downturn this year.

That would raise questions about the €110 billion ($158.5 billion) bailout the country received last year from its fellow euro-zone members and the International Monetary Fund. Those bailout loans are predicated on the moribund economy returning to growth in 2012 after painful fiscal and economic changes.

The deteriorating forecast could refocus market attention on the country where the euro-zone debt crisis began, after weeks of hand-wringing over the economic woes in Italy and Spain.

A longer recession would hurt Greece's efforts to meet deficit-reduction goals, weighing on its ability to collect tax revenues while boosting outlays on social welfare. The country's debt ratio as a percentage of gross domestic product would deteriorate further. And rising unemployment, now nearly 17%, might further stoke public discontent and imperil the government's ability to push through unpopular fiscal steps.