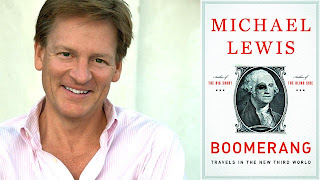 Financial breakdowns and schemes can be found anywhere in the world: from the rocky tundra of Iceland, to the public sector of the Golden state, and in a secluded monastery in Greece. American best-selling author Michael Lewis describes the most recent and devastating bubbles and bets in a part-travel, part-investigative financial journalism book, Boomerang: Travels in the New Third World.

Lewis, author of Moneyball, The Blind Side, and The Big Short, crafts his travel tales such that they echo or foretell of problems within American borders. Here are ten lessons for the U.S. that can be gleaned from his book, which will be released Oct. 3.

1. "In Greece the banks didn't sink the country. The country sank the banks."

As members of the European Union debate over a bailout package for Greece, which is on the brink of a default, bystanders scratch their heads over the genesis of its debt problems.

Lewis describes cultural and political practices that contributed to the country's debt problems. Those include a widespread practice of citizens and companies avoiding taxes with nary a slap on the wrist.

"In Athens, I several times had a feeling new to me as a journalist: a complete lack of interest in what was obviously shocking material," Lewis wrote, describing his many interviews with bankers, tax collectors and a former member of parliament.

"Scandal after scandal poured forth. Twenty minutes into it I'd lose interest. There were simply too many: they could fill libraries, never mind a book."

Lewis wrote that when former Greek minister of finance, George Papaconstantinou, came into office October 2009, he found the country's 2009 budget deficit was 14 percent, not the previous estimate of 2.7 percent.

In an interview with the finance minister, now minister for the environment, energy and climate change, Lewis asks how the country's budget figures and other bookkeeping had been fudged.

"We had no Congressional Budget Office," explains the finance minister, comparing it to the U.S. federal economic agency. "There was no independent statistical service."

Posted by Yulie Foka-Kavalieraki at 3:30 PM