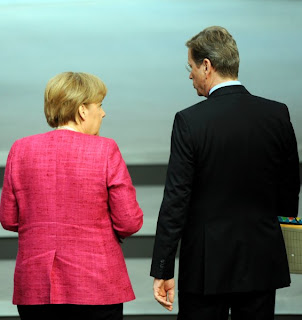 The list of Angela Merkel's critics is long these days, including many from within her own party. But even as she does what she can to ensure the passage of vital euro-zone reforms in late September, she risks alienating German voters. Her political life could be at stake.

Germany's Foreign Minister Guido Westerwelle's job is, for now, safe. His party, the Free Democrats, junior coalition partner in Chancellor Angela Merkel's government, has decided not to force him out of the cabinet.

Given the widespread critique of Westerwelle for his recent insistence that German sanctions played an important role in the toppling of Libyan strongman Moammar Gadhafi -- some of the sharpest having come from within the FDP -- his momentary political survival must come as a welcome respite.

It may also make his boss envious. It is, after all, the kind of reprieve which German Chancellor Angela Merkel will not have the luxury of enjoying any time soon. While Westerwelle is mired in mixed-messages about Libya, Merkel is up to her eyes in the euro crisis. And in Berlin, that crisis has reached a new phase recently.

Until now, the question had been primarily that of saving the common currency from collapse. Now, however, it looks as though Merkel's own political survival is increasingly tied to those efforts. Germans are becoming more and more tired of seeing their government pledge tens of billions of euros to assist heavily indebted members of the euro zone. And parliamentarians, particularly among Merkel's conservatives, have been listening. Should Merkel not be able to push through revisions to the European Financial Stability Facility (EFSF) -- agreed to at a European Union summit meeting in July -- through German parliament, her government, say Chancellery sources, could collapse.