An unpalatable solution: Eurobonds could restore confidence, but at a cost 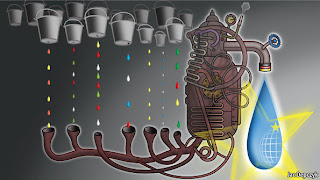 With alarming speed, Europe’s debt crisis has spread this summer from small countries such as Greece on the rim of the single-currency area to large economies such as Italy at its heart. The European Central Bank (ECB) has restored calm in Italian and Spanish government-bond markets for the moment by making big purchases of their debt. But such bond-buying is a temporary palliative. Many are now calling for a more fundamental solution to the crisis: the issue of “Eurobonds” in order to provide a fiscal underpinning to the shaky monetary union.

These Eurobonds are not to be confused with their namesakes invented in the early 1960s, when bankers severed the link between currency and country of issuance by helping international borrowers sell dollar-denominated bonds in London. What advocates of new-style Eurobonds have in mind for the euro area would be even more far-reaching: they wish to sever the link between the creditworthiness of a country and its cost of borrowing. The 17 member states of the single-currency area would be able to borrow in bonds issued by a European debt agency. These would be jointly guaranteed by all euro-area countries and thus underwritten in particular by the most creditworthy of them—above all, Germany, because of its economic clout and top-notch credit rating.

An underlying rationale for Eurobonds is that the public finances of the euro area as a whole look quite respectable, at least compared with those of other big rich economies. The IMF envisages that general government debt will reach 88% of the single-currency zone’s GDP this year. This is lower than America’s 98% and not much higher than Britain’s 83%. The euro area’s projected budget deficit will be a bit above 4% of GDP, better than America’s 10% and Britain’s 8.5%. Neither America—despite the recent downgrade of its debt by a rating agency—nor Britain has been subject to a debilitating loss of confidence. This suggests that pooling debt could indeed put an end to the euro crisis.

More
Posted by Yulie Foka-Kavalieraki at 12:55 AM