Time to Get Angry, Europe

The European common currency is in trouble, several EU countries are facing mountains of debt and solidarity within the bloc is declining. It is European youth, in particular, who have drawn the short stick. Closer cooperation is the only way forward.

Germany's European policy is about to undergo a transformation as significant as Ostpolitik --the country's improvement of relations with the Soviet bloc -- was in the early 1970s. While that policy was characterized by the slogan "change through rapprochement," Berlin's new approach might be dubbed "more justice through more Europe."

In both cases, it is a question of overcoming a divide, between the East and the West in the 1970s and between north and south today . Politicians tirelessly insist that Europe is a community of fate. It has been that way since the establishment of the European Union. The EU is an idea that grew out of the physical and moral devastation following World War II. Ostpolitik was an idea devoted to defusing the Cold War and perforating the Iron Curtain.

Unlike earlier nations and empires that celebrated their origins in myths and heroic victories, the EU is a transnational governmental institution that emerged from the agony of defeat and consternation over the Holocaust. But now that war and peace is no longer the overriding issue, what does the European community of fate signify as a new generational experience? It is the existential threat posed by the financial and euro crisis that is making Europeans realize that they do not live in Germany or France, but in Europe. For the first time, Europe's young people are experiencing their own "European fate." Better educated than ever and possessing high expectations, they are confronting a decline in the labor markets triggered by the threat of national bankruptcies and the economic crisis. Today one in five Europeans under 25 is unemployed. 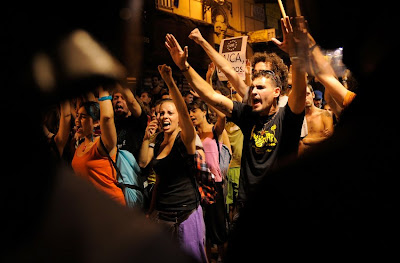 Posted by Yulie Foka-Kavalieraki at 10:35 PM