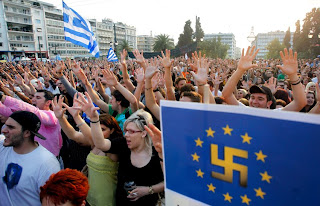 Germany's neighbors and allies are growing increasingly concerned about Berlin's foreign policy direction. Some even fear that efforts to export its fiscal ideas could mean the prosperous country has lost sight of the European idea. Or worse yet, that it wants to dominate the currency union.

The euro has failed, though more politically than economically, according to an article in the September edition of US magazine Vanity Fair. "Conceived as a tool for integrating Germany into Europe, and preventing Germans from dominating others, it has become the opposite," financial journalist and author Michael Lewis writes. "For better or for worse, the Germans now own Europe."

The fact that a reunited Germany has weathered the Western world's financial crisis with ease, at least so far, has made its neighbors and friends uneasy. In the political salons of Washington and Paris, from Brussels to Madrid, and inside political broadsheets and think tanks, people are asking whether the new Germany is altering its foreign policy. Is Berlin turning away from the European Union, or is it the opposite, that it wants to use the currency to gain control of the entire continent -- something it couldn't do with weapons?

Geostrategists point to the emergence of a power imbalance, along with possible new conflicts between rival countries. In a guest commentary published by The New York Times last week, Former British Prime Minister Gordon Brown criticized Germany's approach. "Germany's recent failure to act from a position of strength endangers not only the country itself, but the entire euro project that Germany has spent decades developing," he wrote. Other commentators complain that Germany is once again veering towards unilateralism, and some, mainly in Britain, are even referring to a "Fourth Reich." But at the heart of this debate remains the question: Where is Germany headed?

In Washington, Chancellor Angela Merkel is seen as an uncertain ally. The Americans question whether she has truly left her East German past behind, or if she is rediscovering it -- at least in terms of Germany's interests. "Europe's Economic Powerhouse Drifts East," a headline in the The New York Times claimed in July.