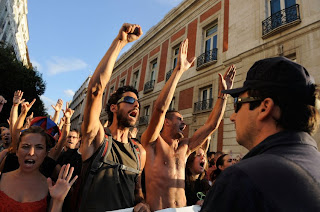 The rich countries of the northern euro zone are bearing the brunt of bailing out their debt-stricken fellow members. Resentment is growing among their populations, helping euroskeptic right-wing populists to win support. But there is little awareness of how much the European Union has done for their own countries.

Officially, of course, the one-euro coin is worth the same everywhere. But given the current state of the euro zone, you could be forgiven for thinking that the coin with the Greek owl or Spanish king on its reverse is worth less than one bearing, say, a German eagle or the silhouette of the Netherlands' Queen Beatrix.

An invisible crack now divides the euro zone. With their triple-A rating from the American credit rating agencies, six of the euro zone's 17 member states are considered sound borrowers. And the more government finances in Greece, Portugal, Italy, Spain and Ireland are thrown out of kilter, the more the countries with the best credit ratings are expected to vouch for the euro. They include, in addition to Germany and France, Finland, Luxembourg, the Netherlands and Austria.

From the Austrians eating at sausage stands in Vienna to the regulars at fish stalls in The Hague, to Luxembourg bankers and Finnish businesspeople, many in the euro zone's model countries seem conflicted nowadays. They are torn between the strong suspicion that some of their hard work is going down the drain with the hundreds of billions that are currently disappearing into aid packages and bailout funds for threatened EU countries, and the hope that their political leaders, in their efforts to appease citizens, might be right after all.

This euro crisis is not only about rescuing a common currency. It's about fundamental questions of political union.

It's about the suspicions of many Europeans that people in the southern part of the EU, derisively referred to as the "olive zone," lived well at the expense of others, and that those who were more careful with their money are now expected to swallow the poison that is making its way northward. On the other hand, it is not clear whether the EU will be able to continue in its current form if some countries are effectively under receivership while the strong economies are in a position to call the shots in future. Is there a threat that Germany, the economic giant among the triple-A countries, could unintentionally become the leading power in Europe through its fiscal authority? 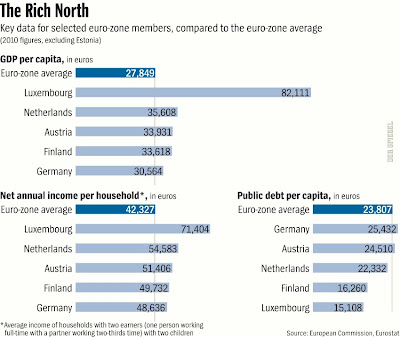 Posted by Yulie Foka-Kavalieraki at 10:32 PM