Head of Euro-Zone Bailout Fund: 'The Crisis Will Be Over in Two to Three Years' 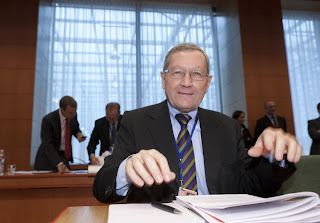 Klaus Regling, the German CEO of the euro zone's bailout fund, the European Financial Stability Facility, is confident that the monetary union can overcome the current crisis. He considers the euro zone to be in a better position than the US when it comes to public debt, and accuses his fellow Germans of "hysteria."

The picture, a Balinese island landscape, is still leaning against the wall where it was a year ago. Back then, the European Financial Stability Facility (EFSF) had just recently been set up, and its chief executive officer, Germany's Klaus Regling, was too busy to hang the souvenir from Indonesia on the wall.

He is still just as busy today. Three European bailout packages later, it is clear that the EFSF and the European Stability Mechanism (ESM), which will succeed it in 2013, will have even more to do in the future. European heads of state and government recently decided to substantially upgrade both funds.

What is now taking shape at the EFSF's offices at 43, Avenue John F. Kennedy in Luxembourg City is the nucleus of a super-authority with which the 17 countries in the euro zone hope to save their currency. The amount of money it has at its disposal in the event of an emergency -- €440 billion ($634 billion) -- is three times as large as the entire European Union budget. The EFSF and the ESM will have a similarly important effect on the stability of the euro zone as the European Central Bank (ECB).