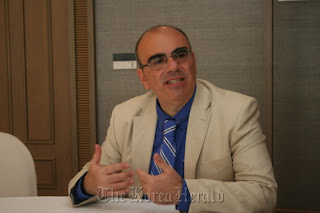 A prominent Greek university professor and economist has warned South Korea not to repeat his country’s economic mistakes, calling the plan to give free school meals to all students “irresponsible.”

“Is it a matter of equality? Of course not. Why middle class Seoul citizens, maybe with no children, should pay for free lunch by children of rich families (I cannot understand),” University of Athens professor Aristides N. Hatzis told The Korea Herald on Wednesday.

Making reference to the political climate in Greece and elsewhere, he said that it was important for voters to be made aware of the long-term consequences of irresponsible government spending.

“It is very difficult for parties to keep a fiscally conservative position for such a long time. This means significant political cost in the elections,” he said.

The professor, who served as a member of the steering committee of the European Association of Law & Economics and has written for the New York Times, added that as Korea continues to advance it should aim to take the best from the American and European economic models rather than choosing between the two.

“For example, (in) the United States there is capital and labor mobility that is much better than in Europe. In Europe … there are some cases of welfare states that are so bad as in Greece. I think also that the system of checks and balances of the U.S. constitution is much better than any other European state,” he said.

Hatzis, who was in Seoul to give a seminar on the dangers of welfare populism, stressed he was not against the welfare state, but that it was a dangerous signal when “money goes to people that are not in need of help.”

On Tuesday, he told a gathering at The Plaza Hotel in Gwanghwamun that it was “difficult to fail as miserably as Greece, but it is very easy to fail in the same way.”