Greece's healthcare system is on the brink of catastrophe

Adonis Kostakos is unemployed and diabetic. Aged 50, he last worked regularly four years ago in the port of Piraeus. Back then he used Greece's public hospital system to have his blood sugar checked and get his medication.

These days, receiving no unemployment benefit, he cannot afford to pay for his drugs or the new €5 hospital fee introduced as part of Greece's austerity measures.

So today Kostakos has come to a free clinic in the shipbuilding town of Perama, where he lives, to pick up his medication. The drop-in surgery run by the global charity Médecins du Monde was originally set up to cater for illegal immigrants. But today, there are only native Greeks.

Posters on the wall show war and famine, but the solitary doctor, George Padakis, 30, is dealing with a different kind of catastrophe – victims of the financial meltdown, which has pushed Greece's health system to the brink.

"I have no insurance and I'm unemployed," says Kostakos. "I heard about this clinic from a friend. I was going to the public hospital, but nowadays I can't afford to do even that. I know lots of people in this town who are in the same situation as me, 10 of them personally." 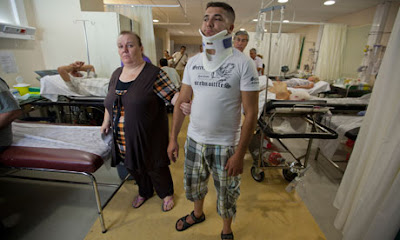 Posted by Yulie Foka-Kavalieraki at 12:05 AM