Greece's finance minister: 'We will make a superhuman effort'

When Evangelos Venizelos, the Greek finance minister, first met his colleagues in Brussels in June the atmosphere was far from congenial. In the post for barely a day, the burly professor of law listened impassively as eurozone finance ministers berated him for the lack of progress Athens had made in reining in its runaway debt.

Greece was all mouth and no action; it was good at passing reforms to modernise its basket case of an economy but then did nothing to enforce them.

At the end of the tirade, Venizelos took the stand and promised to deliver.

Two weeks later, at the next gathering of finance ministers, he had overseen passage of a €28bn (£24.4bn) fiscal plan of spending cuts and tax increases and a law accelerating implementation of the measures, and he had kickstarted the biggest privatisation drive in western history.

"We are in the midst of a battle," he says, slumping into a sofa in his sixth-floor office on Syntagma Square, the arena for many of the violent protests that have rocked Greece this summer. "A battle to implement a program of fiscal consolidation … a battle to execute the budget, a battle to enforce privatisations.

"It's very important for us to act on our commitments to the EU and IMF. And, we will be true to our word," adds the minister, who this week told parliament that Greece was in a race against time to render its debt dynamics more sustainable. "We will make a superhuman effort to be true to our word." 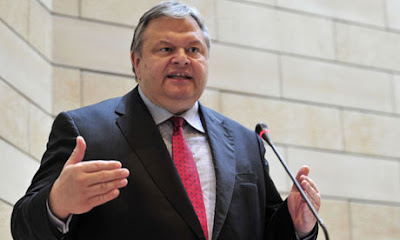 Posted by Yulie Foka-Kavalieraki at 12:11 AM