Among the chic bars along Thessaloniki's historic waterfront, one restaurant stands out. "We want our money!" reads a banner dangling from the terrace of an American-themed diner and grill. Inside, 12 staff have changed the locks, are serving cans of supermarket beer to supporters and taking it in turns to sleep nights on the restaurant floor in protest at months of unpaid wages and the restaurant's sudden closure. This is the new symbol of Greece's spiralling debt crisis: a waiters' squat.

Margarita Koutalaki, 37, a softly spoken waitress, divorced with an 11-year-old daughter, worked here part-time for eight years, earning about €6.50 (£5.70) an hour. Now she is taking turns to sleep on an inflatable mattress in an upstairs room, guarding the squat, while her parents babysit her child.

"I'm owed about €3,000 in unpaid wages," she says, warning her plight is shared by legions of workers all over Greece who are waiting for months for outstanding pay from struggling business owners. "At first we were told we'd be paid the following month, then the pay stopped completely and we were told by phone that the restaurant was closing. We're still working, we're keeping the place going, providing food and drinks to our supporters. We've got more clients than before. This protest is all we can do. It comes naturally."

The waiters serve cheap drinks and cut-price dinners to a new clientele of leftists and protesters from the four-month-old "indignants" movement, who would previously never have set foot in this bastion of imperialism, the Greek franchise of US giant Applebee's. A banner in English tempts tourists with cheap souvlaki and meatballs "in support of the workers". 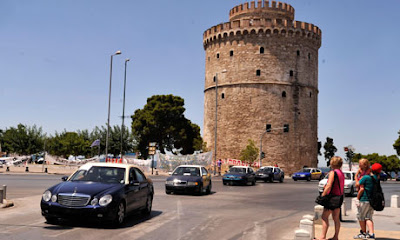 Posted by Yulie Foka-Kavalieraki at 11:08 PM