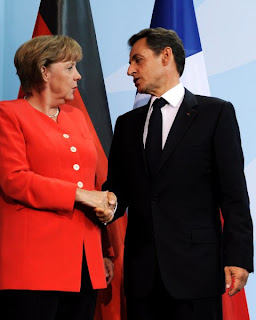 Angela Merkel has been steadfastly opposed to euro bonds so far, but Germany's Nein no longer seems set in stone. French President Nicolas Sarkozy may have changed his mind too after the market turmoil last week. However, euro bonds present a serious domestic political risk for Merkel.

The introduction of euro bonds, government debt issued by the entire euro zone, may be the only remaining way to solve the euro debt crisis, say some government leaders and economists, and Chancellor Angela Merkel could come under pressure from French President Nicolas Sarkozy to drop her categoric opposition to them at the special meeting planned by the two in Paris on Tuesday.

Over the weekend, Italian Finance Minister Giulio Tremonti called for the introduction of such bonds, saying, "We wouldn't be where we are now if we had had euro bonds."

The chairman of the euro group of euro-zone finance ministers, Jean-Claude Juncker of Luxembourg, and the EU Economic and Monetary Affairs Commissioner, Olli Rehn, have long proposed euro bonds, arguing that they would restore stability by stopping speculative attacks on the debt of individual euro member states.

But they would also increase Germany's borrowing costs, because the interest rates on such debt would be higher than on German sovereign bonds. Estimates for the annual rise in German interest payments vary widely, from €10 billion ($14.3 billion) to just under €50 billion ($72 billion).