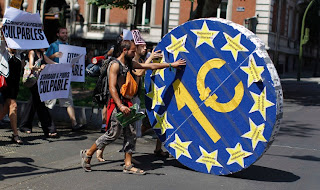 The German government is rejecting calls to allow the euro rescue fund, the EFSF, to bail out troubled banks directly. In doing so, Berlin is only deceiving itself -- and endangering the euro.

Start off by saying no. That, in a nutshell, seems to be the German government's policy when it comes to fighting the euro crisis -- one it has followed since the spring of 2010. Whether it was aid to Greece or to the expansion of the euro rescue fund, the European Financial Stability Facility (EFSF), Chancellor Angela Merkel always started out by taking a position contrary to economic and political necessity, only to end up caving in later. The approach has not been pretty to watch, and it also tended to exacerbate the crisis.

But the government has not, it would seem, learned its lesson. That can be seen by its contribution to the current debate over whether the rescue fund EFSF should be authorized help troubled banks directly in the future. Naturally, Berlin is rejecting this approach. But in so doing, it is deceiving itself on two counts. Firstly, it is behaving as if the banks were in excellent condition. And secondly, it is continuing to embrace the illusion that the euro can be saved without EU member states having to surrender any national competencies to Brussels.

Berlin's position stands in contradition to that of two institutions that know better. Both the International Monetary Fund (IMF) and the European Banking Authority (EBA) believe that European banks need more capital quickly in order to survive the current and future crises. The EBA is also calling for the EFSF rescue fund to take over this task and -- if necessary -- give the banks fresh money.

One can argue about whether it is wise to unsettle investors with such a public discussion, if one already considers the banks' position to be shaky. In terms of their proposals, however, the IMF's managing director Christine Lagarde and EBA head Andrea Enria are absolutely correct.