Euro Bonds 'More a Band-Aid Than a Miracle Cure' 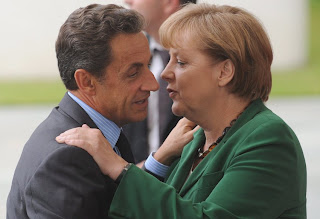 The issue of euro bonds will loom large at German Chancellor Angela Merkel's crisis meeting with French President Nicolas Sarkozy on Tuesday. German editorialists on Monday are divided on whether the troubled bloc should pool its debt to shore up investor confidence.

Pressure to find a solution to Europe's debt problems is running high. The extent of the crisis is all too clear to German Chancellor Angela Merkel and French President Nicolas Sarkozy who are scheduled to meet on Tuesday to look for a long-term remedy to the bloc's economic malaise.

One possible solution would be the creation of euro bonds, meaning that money borrowed by individual countries would be guaranteed by the whole bloc. Such a move, rejected by many German politicians, would increase the cost of borrowing in Germany and other, more financially stable, members of the currency union.

In a SPIEGEL interview, German Finance Minister Wolfgang Schäuble explained his opposition to euro bonds, saying "there is no unlimited support" for the common currency.

But for Greece, Ireland, Portugal and other countries struggling to keep up with soaring interest payments on their debt burdens, euro bonds would ease the pressure and, its advocates hope, avert potential defaults. Italian Finance Minister Giulio Tremonti argued the bonds would offer a "master solution" to the current crisis.

German commentators on Monday are split on the wisdom of adopting euro bonds. What some see as a lesser evil is seen by others as a politically explosive move towards a transfer union. But commentators agree that Merkel and Sarkozy need to move fast -- to avoid being overtaken by fast-moving events.