Chest pains: Europe’s sovereign-debt crisis is constricting the flow of money to its banks 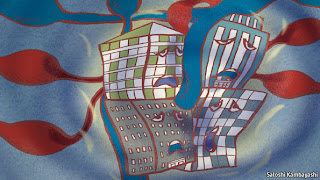 “I’ve never seen risk aversion this intense,” says the chief executive of a large European bank. “It is unsustainable.” His anxiety is understandable given the wild gyrations that rocked bond and commodity markets in early August and continued through the slow trading days of mid-August, when gold hit new highs and the yields on government bonds touched new lows in Britain and America.

Steep falls in stock prices this month have erased all the gains made over the past year. The hardest hit have been banks, with those in Europe getting the biggest clobbering. European bank shares have fallen by 25% this year, and have underperformed the wider markets and American bank stocks over the past two years. Banks in France are down by 33% since the start of 2011, those in Italy by 37%. Many banks now trade at a deep discount to the value of their assets. Barclays, for instance, has a market value that is less than half the worth of its assets. European banks are not unique in this regard. Bank of America, whose share price has slumped by almost half this year, is now valued at about one-third of its assets.

Posted by Yulie Foka-Kavalieraki at 12:51 AM