The bonds that tie—or untie 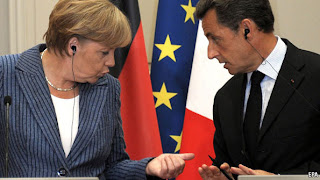 The pattern has grown tiresomely familiar. Bond markets shift sharply against weak euro-zone members. Leaders hold a crisis summit to save the euro with more forceful rescue measures. The initial euphoria lasts a few weeks, a few days or even just a few hours—and the cycle begins once again. Can Europe’s politicians ever break it?

To judge from this week’s summit between Germany’s Angela Merkel and France’s Nicolas Sarkozy, the answer is no. The two came together in the holiday season partly because the markets had moved on from an assault on Italy to attack France, a core AAA-rated euro member. Investors were hoping for a deal to expand the euro zone’s bail-out fund, the European Financial Stability Facility (EFSF), or to start issuing mutually guaranteed Eurobonds. Instead the two leaders did little beyond repeating previous accords, promising stronger euro-zone economic governance and putting up such distractions as a financial-transactions tax, harmonised corporate taxes and constitutional commitments to balance budgets—along with more euro-zone summits in future.

The markets were unimpressed. A day later the European Central Bank was again buying Spanish and Italian government bonds, having spent €22 billion ($32 billion) the previous week. The latest shockingly low growth figures for the euro zone in the second quarter may partly reflect fiscal austerity, but they also suggest that it will be harder than ever for troubled economies to grow out of their debt burdens.