Anger at the Euro Bailout: Merkel Seeks to Forestall a Conservative Revolt 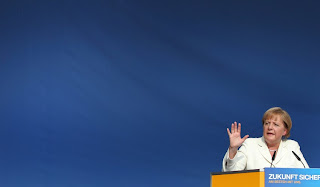 Chancellor Angela Merkel will meet conservative parliamentarians on Tuesday evening to try to allay their concerns about her management of the euro crisis. Many are unhappy about the EU deal to increase the scope of the bailout fund -- and are dissatisfied with Merkel's leadership style.

Many in Chancellor Angela Merkel's conservative Christian Democratic Union party are unhappy about Germany's growing commitment to euro bailout packages and fear that the nation is being locked into a "transfer union" in which German taxpayers will end up bankrolling high-debt nations that got themselves into trouble through their own profligacy.

The dissatisfaction is dangerous for the chancellor because it could put her parliamentary majority at risk in a crucial September vote on the July 21 agreement by euro zone leaders to widen the scope of the €440 billion ($637 billion) euro rescue fund.

Klaus-Peter Wilsch, a member of parliament for the CDU, is among the most vocal critics of Merkel's euro policy, and says dozens of fellow MPs feel the same way. "I know from personal conversations that there is great dissatisfaction among 30 to 40 conservative MPs," he says.

Wilsch has said he will vote against the new euro measures because the increased powers being assigned to the European Financial Stability Facility (EFSF) would be a step towards introducing euro bonds.

Merkel will try to calm nerves on Tuesday night when she meets with conservative parliamentarians to woo their support for the legislation. She has repeatedly made clear in recent weeks that she is opposed to euro bonds, which some senior EU officials and high-debt countries including Italy have been calling for as a way to stabilize debt markets.