Why It's OK to Ignore Bad News

The stock-market tug-of-war of recent weeks reflects a battle between companies making bundles of cash and countries that seem badly short of the same.

In the past several days, sentiment has shifted back and forth as investors have alternated between worries about the U.S. debt ceiling debate and euro-zone debt woes and excitement about strong earnings from companies like Apple, Coca-Cola and McDonald's.

With the U.S. debt-ceiling deadline Aug. 2 and the euro zone still fumbling about what to do with Greece (and Ireland and Portugal and Italy and Spain), the market has plenty of externalities to worry about. The question is: What will ultimately win out, earnings or Everything Else?

Based on the past week, earnings are gaining the upper hand, which makes sense. While the euro and U.S. debt issues are serious, odds are they won't lead to a terrible calamity. Moreover, as long as the fiscal problems persist, it is more likely that central banks will keep interest rates very low. When interest rates are low, stocks are relatively more attractive since returns in fixed-income assets are largely tied to interest-rate policy.

With the economy limping along, corporate earnings strength might seem anomalous. But it isn't. Part of the issue is that companies have become more productive and efficient. But a bigger reason for the dichotomy stems from the global nature of many companies, big and small. 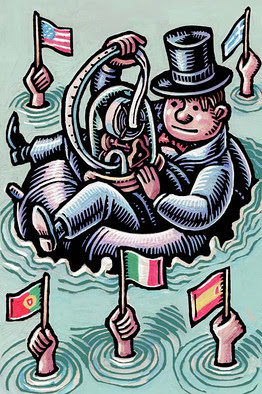 Posted by Aristides N. Hatzis at 9:41 AM