Why Euro May Keep Defying Gravity

Betting against the euro isn't a no-brainer.

The euro-zone economy is weakening, at least one nation is careening toward default, and the breakup of the 17-member currency bloc can't be entirely ruled out. In a sign that duress continues to spread, yields on 10-year Spanish and Italian debt rose on Friday despite the latest bailout deal reached for Greece. They now stand at about 5.8% and 5.4%, respectively, up about half a percentage point each from January. 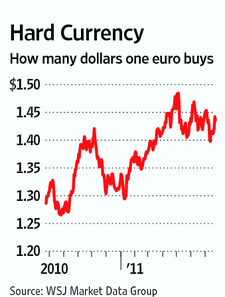 Yet all this has hardly torpedoed the euro. In fact, the currency has strengthened 6.6% against the dollar this year to $1.4358 as of Friday. It is nearly 11% stronger than a year ago, even as sovereign-debt troubles have continued to build and the euro zone's economic growth prospects have dimmed. It almost seems obvious the euro's next move should be down. Yet Nomura Securities, for one, barely expects it to budge. Analyst Jens Nordvig expects the euro will be at about $1.40 at the end of the quarter—and still around $1.40 at year end.

That is as much because of dollar weakness as euro strength. Indeed, the euro has weakened this year against other, sturdier currencies, such as the Swiss franc. U.S. fundamentals "make it tough to be a dollar bull," says Deutsche Bank currency strategist Alan Ruskin. The nation's weak economic recovery, high unemployment and, importantly, near-zero interest rates all make the currency relatively less attractive. That is likely to keep the euro around these levels until the Federal Reserve starts to raise interest rates or the European Central Bank lowers its own.

More
Posted by Aristides N. Hatzis at 9:01 AM