Where the Axe Will Fall in Greece 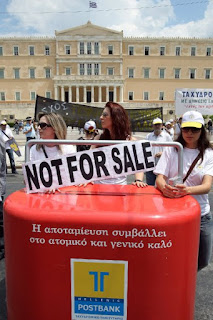 The Greek government on Wednesday voted to approve highly divisive austerity measures that have led tens of thousands of people to take part in heated street protests this week. With its radical savings program, the government in Athens hopes to save close to 80 billion euros. SPIEGEL ONLINE provides an overview of the plans.

Mid-term budget planning. The term may sound harmless, but it contains plenty of explosive material in Greece.

The term refers to the austerity measures approved by the Greek parliament on Wednesday, which include painful cuts to public spending and tax increases. Prime Minister George Papandreou is seeking to impose cuts of a total of €78 billion ($112 billion) by 2015. Additional government revenues of €6.5 billion are also planned this year through increased taxes and other levies. Between 2012 and 2015, a further €22 billion in additional revenues are also expected to be added to government coffers.