What the New Greek Deal Means for the U.S. 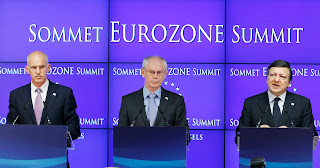 There's been a lot of talk about what the latest eurozone deal on Greece means for Europe. But Americans may also be wondering what it means to them.

The New York Times flicked at this today. U.S. money market funds are the real sore spot for Americans when it comes to the eurozone crisis. They hold billions in European banks' debt, which, according to some estimates out this summer, could add up to as much as half of the $1.6 trillion in prime money market fund assets. Some analysts think money market funds should be safe under the new plan to bail out Greece, but I'm a bit more skeptical.


Money-market funds are at least three steps removed from any Greek debt. Greece would have to take down Spain or Italy in order to become a threat to the French banks which money funds hold the debt of," said Peter Crane, president of Crane Data, which tracks such funds.

The thinking here is that the biggest threat to Europe is 'contagion,' or the spread of investor fears about Greece to other shaky eurozone countries like Italy and Spain, which would force bond prices in those countries to rise even higher and make their prospects of paying down debt all the more difficult. Those dynamics, as in Greece, could lead to more bailouts for Italy and Spain, which would max out the eurozone's existing bailout fund and lead to a new round of squabbling between Germany, France, and European banks on who's picking up the tab.