Violent Clashes in the Streets of Athens 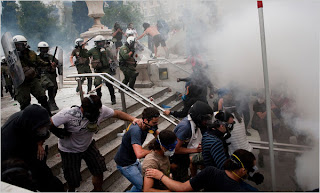 Confrontations between the police and protesters reached a violent climax here on Wednesday as armored riot officers beat back demonstrators and fired volleys of tear gas into the crowds who had gathered outside Parliament. Inside, lawmakers approved a package of austerity measures aimed at helping Greece avoid a default.

On the second day of a two-day general strike called by unions, rogue protesters also attacked the Finance Ministry on Syntagma Square across from Parliament and set fire to a post office in the ground floor of the building. The King George Palace, a luxury hotel that faces the square, was evacuated in the afternoon.

A police spokeswoman said that 31 police officers were injured and that 30 people had been detained, leading to 11 arrests. Local news media reported that dozens of protesters were hospitalized, and video clips showed the police striking people with their batons.

Amnesty International released a statement on Wednesday condemning the “repeated use of excessive force by police in recent demonstrations, including the disproportionate and indiscriminate use of tear gas and other chemicals against largely peaceful protesters.”