U.S. and European Markets Rise on Optimism Over Greek Vote 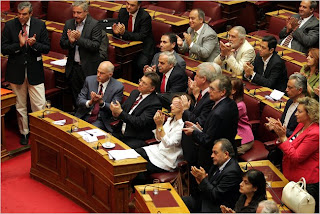 A relief rally swept the European and American markets after an early Wednesday vote by the Greek Parliament to approve an austerity plan.

The plan was passed, a condition set by international lenders for providing more financing and preventing a default, after weeks of uncertainty in financial markets related to the debt problems in the euro zone.

Investors had been bracing for the Greek Parliament’s decision on the package, which includes unpopular wage cuts, tax increases and privatizations. While investors got some relief with the announcement that it had passed, analysts warned that unresolved fiscal issues remained.

“Today’s vote will certainly give some short-term relief to markets, but concerns about the long-term feasibility of Greece’s fiscal plans still remain in place,” said Diego Iscaro, an IHS Global Insight senior economist, in a research note after the vote.